The Knowledgebase of Interatomic Models (KIM) project had its Inaugural Meeting in San Diego, California, during February 26-27, 2011, under the auspices of the TMS 2011 Annual Meeting & Exhibition. The KIM project is based on a four-year NSF cyber-enabled discovery and innovation (CDI) grant and has the following main objectives: 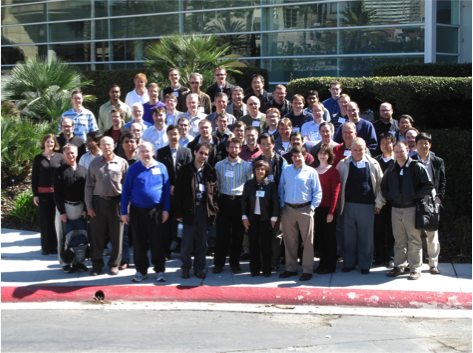 The KIM Inaugural Meeting was attended by 63 participants from 7 countries (Canada, Germany, Japan, South Korea, Sweden, UK and the US) and included many of the key interatomic potential and molecular dynamics code developers. (A list of attendees appears at the end of this message.) The objectives of the meeting were two-fold. First, to clearly define the goals and structure of the KIM project based on the needs of the atomistic simulation community, and second to obtain the community’s endorsement of KIM. The event was highly successful on both counts.

The activities in San Diego revolved around the creation of a Requirements Document (RD) for KIM. RDs are common in industry where they are used to fully define all aspects of new products during the development stage. The KIM RD addresses four main aspects of the project:

The participants divided into four committees to study these topics in depth. The committees reviewed a draft RD, line by line, and reworded it as necessary. The atmosphere throughout this process was very positive, despite the fact that some of the debates (especially in the API committee) were intense. In the end, a consensus was reached on almost all points that were discussed. The RD, created through this process, will serve as a living document that will accompany the KIM project as it develops. This document will be placed online at https://openkim.org, where anyone interested in atomistic simulations will be able to comment and provide feedback.

As part of the process described above, a KIM Board was defined with the responsibility of making strategic decisions about the operation of KIM. Three participants, Prof. Michael Baskes (UCSD/LANL), Prof. Susan Sinnott (U. Florida) and Dr. Chandler Becker (NIST), were unanimously elected to serve as an interim KIM Board and Nominating Committee with the responsibility of suggesting additional board members to be voted on by all KIM registered users. In addition, Prof. Ellad Tadmor (U. Minnesota) was unanimously elected to be the KIM Director in charge of the development of the KIM project and its day-to-day operations.

In a continuation of this collaborative spirit, at the end of the meeting, the participants unanimously voted to accept the following resolution:

The assembled at the KIM Inaugural Workshop in San Diego, CA Feb. 26-27, 2011, support the efforts of the KIM project to develop open standards and software for the atomistic simulation community. These include:

This forum also recognizes the benefit of having interatomic models archived subject to provenance and quality controls.

There was true sense of excitement in San Diego regarding the emergence of KIM and the possibility that atomistic simulations were entering a new era of cooperation and standardization.